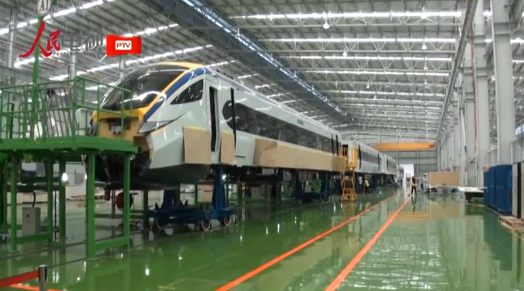 Taking the train from Kuala Lumpur to the north of Malaysia, after less than two hours and a half, you will reach the town of Batu Gajah, where there’s China's first overseas manufacturing base of railway equipment.

With an annual capability of producing 100 trains and repairing 150 railcars, it has become the first "railway factory" in Malaysia, which represents the highest level of technology in railway equipment manufactory in ASEAN countries.

Wang Luke, general manager of China CSR Malaysia Rail Transit Equipment Company, said: "In the next five years, the total amount of the demand in rail, EMU and electric locomotives in Malaysia will reach one thousand. The amount of the railcars which need to be repaired will reach 2,000. It is a very big market. The annual sales for the ASEAN manufacturing center are expected to reach 100 million USD."

As of July this year, the center employs 165 people, of which 144 are recruited locally." "Recruitment is still underway-more than 90 percent of employees will be hired locally," said Long Wei, the business manager.

“The establishment of the China CSR Malaysia Rail Transit Equipment Company is a benefit-sharing, win-win approach by China. We do not just want to build railway equipment, but also share China's successful experience and technology abilities with Malaysia. From this perspective, the establishment of the ASEAN manufacturing center is a very good initiative for China's railway industry to 'go out'," said Wu Zhengping, Economic and Commercial Counsellor of the Chinese Embassy in Malaysia.

More reading about "SET" in China