Home
Fastest Growing Job Sector in U.S in the Next 10 Years

Fastest Growing Job Sector in U.S in the Next 10 Years Education Articles

Which Careers are the Fastest Growing in U.S. Employment Projections from 2012-2022?

Are you planning to study a degree subject that can provide a better prospect of employment. Before you do, you might want to consider which types of jobs are expected to have increased openings within the coming years. The Bureau of Labor Statistics of U.S. has comprised a list of the occupations anticipated to be the fastest growing from 2012 through 2022.

Occupations and industries related to healthcare are projected to add the most new jobs between 2012 and 2022, the U.S. Bureau of Labor Statistics (BLS) reported. Total employment is projected to increase 10.8 percent, or 15.6 million, during the decade.

In addition to projecting employment for each detailed occupation, BLS depicts the education, related work experience, and on-the-job training typically needed for occupations. Occupations that typically require post secondary education for entry are expected, on average, to grow faster than occupations that require a high school diploma or less. 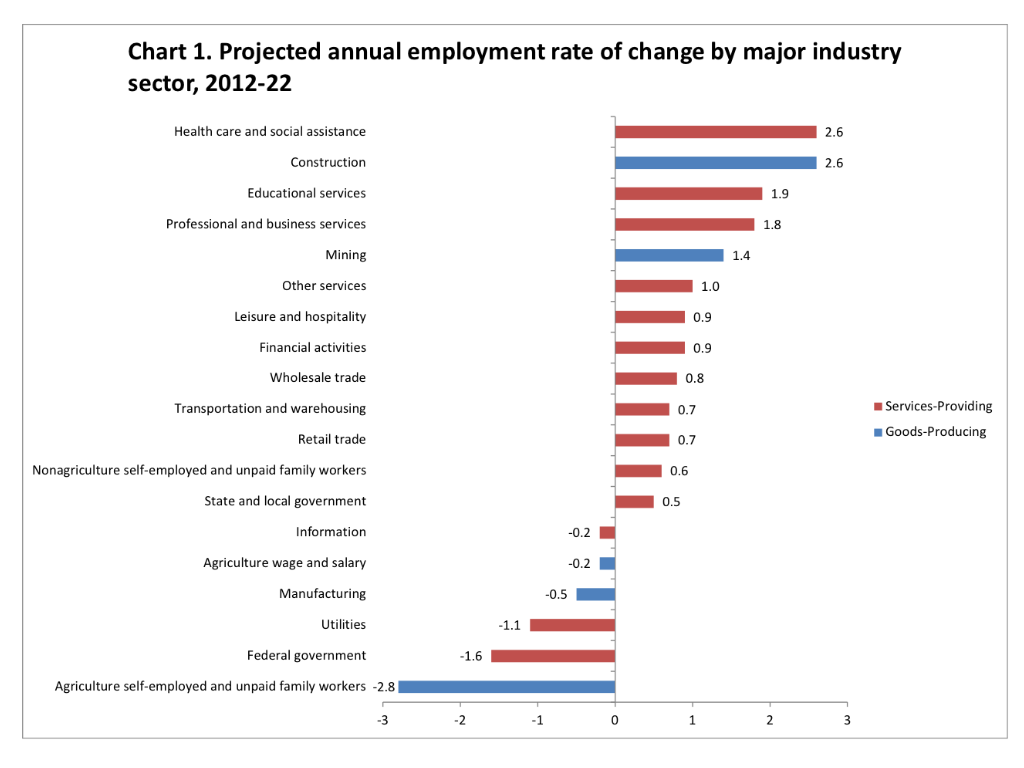 Employment in Healthcare Industry Continue to Dominates - into the next decade

The health care and social assistance sector is projected to grow at an annual rate of 2.6 percent, adding 5.0 million jobs between 2012 and 2022. This accounts for nearly one-third of the total projected increase in jobs. The growth reflects, in part, the demand for healthcare workers to address the needs of an aging population. (See chart 1.)

One of the reasons healthcare is experiencing such a large growth is because, as the baby-boomer, increase of life expectancy, generation gets older and they are seeking more medical cares.

Likewise, United Nations also projected unprecedented ageing population that the twenty-first century will witness even more rapid ageing than did the century just past.

Additionally, with healthcare becoming more expensive, many of the tasks that used to be conducted routinely by doctors or nurses are now being delegated to healthcare professionals who receive a lower salary, such as physician, medical, and dental assistants, in order to cut costs. The rise of demand in healthcare and social assistance sector also partly due to more individuals choose to be treated at home, rather than at hospitals or long-term care facilities.

Employment in the construction sector is projected to grow 2.6 percent annually. This equates to 1.6 million new jobs over the 2012-22 decade, the most among goods-producing sectors and third most among all major industry sectors. (See and chart 1.) Despite expected fast growth, construction sector employment in 2022 is projected to be below the peak level (7.7 million; 2006). 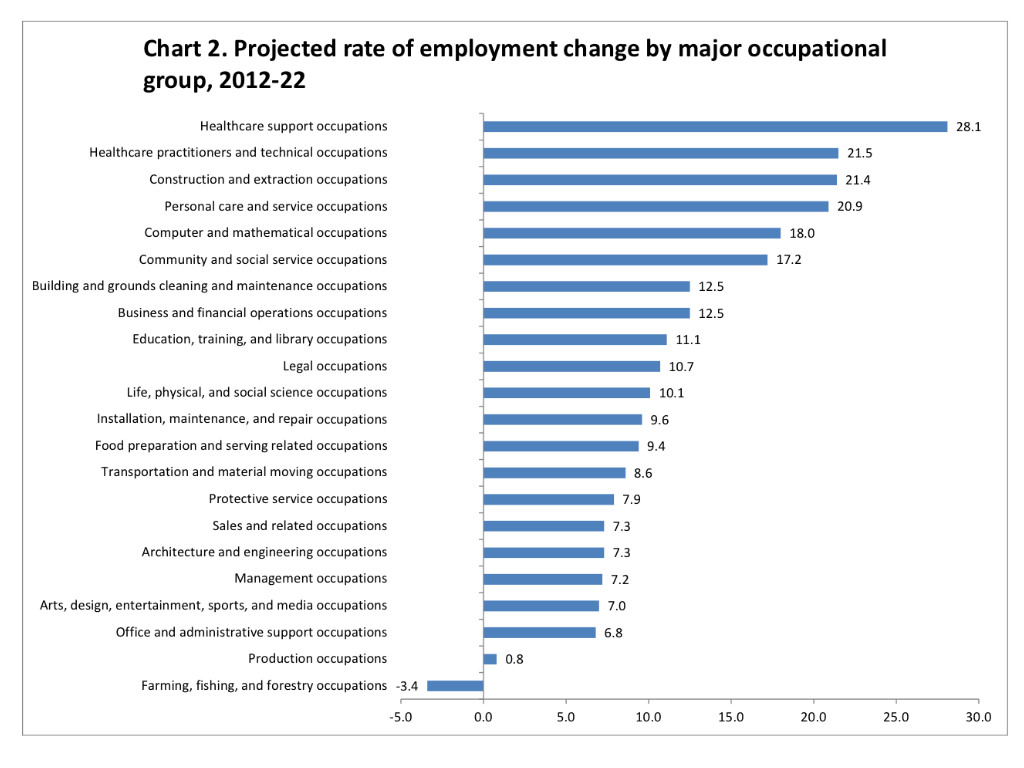 Projected industry employment is distributed among occupations based on how industries are expected to use those occupations.

The BLS projections are used by high school students and their teachers and parents, college students, career changers, and career development and guidance specialists to gauge the prospect of employment in the coming years.

1. The Fastest Growing Jobs of This Decade

4. Top 10 Most Employable Majors in China