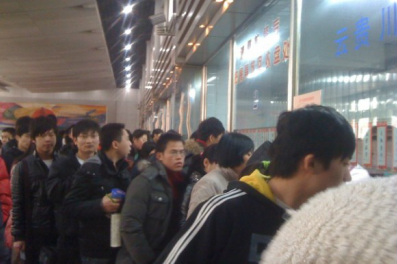 11.12.2013 - Chinese restaurants, restaurateurs and chefs produce great cuisine, but some of the best food in China can be found in the more than 2,000 university and college cafeterias and dorms across the country.

The vast majority of university students in China live on campus, housed in shoe box dorm rooms packed tight with bunk beds tiered twice or even thrice. Desks are small cubicles or simply a shared desk area, meaning students often have to work on their beds.

If students are lucky, the room will have a small closet area, but mostly I’ve seen them limited to a few shelves above their beds or desks. Bathrooms are communal for each floor, and as there can be hot-water restrictions or lavatory curfews, showering has to be coordinated and planned in rotation with classmates.

Forget having your own kitchen in a Chinese dorm. Sometimes there will be an area with a stove and counter tops on each floor or alternating floors. These tend to be useful only for simple foods such as a quick rice stir-fry or for steeping instant noodles, or the occasional celebratory get-together with a group of friends.
Busy, hungry students create demand

For day-to-day dining, all of China’s more than 6 million students in higher education eat at the dorms and in school-run cafeterias.

Class schedules are generally packed from morning to night, much like the regimented routines of American high school kids. This means Chinese students have to run, or more often bike, between classes with just a few minutes to spare. The cafeterias provide a convenient place to eat on campus.

The canteens are also appealing because they’re inexpensive, being subsidized by the university, which is in turn subsidized by the government. Meal prices vary. I’ve found Chinese breads such as the crêpe called jianbing or the steamed buns with filling called baozi for as little as 2 renminbi (about 33 cents). Pricier specialties sell for 10 or 15 renminbi (about $1.60 to $2.50). These include meat or fish stews, or malatang, a dish for which ingredients are weighed and then cooked fondue style in a smoky, spicy Sichuan-inspired broth.

Chinese campus food is also generally considered safe — and that carries a lot of weight in a country facing frequent food scandals such as clenbuterol-laced pork, cardboard-filled baozi, milk mixed with melamine and, most recently, rat meat that was passed off as lamb.

The universities, and the local government officials affiliated with them, are known to take special care to ensure the quality and cleanliness of ingredients, lest the country’s future leaders (especially in the top-tier universities in Beijing, Shanghai and other major cities such as Xi’an and Chengdu) fall ill. That would not play out well in the Chinese media, which recently received additional reporting freedoms from the government to cover food safety related stories.

This is not your Western dining hall experience in which food is stale, overcooked, bland, generic or unimaginative. Those campus meals probably came in the form of a nugget or a ball, and had previously been frozen; Chinese dorm food is much different. Chinese students eat meals representing the vast variety of culinary traditions available throughout the country, all cooked fresh at their behest by the armies of kitchen staff catering to the various cuisines.

At Beijing’s Tsinghua University, considered China’s Massachusetts Institute of Technology and where I studied Mandarin for a year, Canteen No. 10, the largest on campus, offered regional cuisines from Canton, Guizhou, Sichuan and Yunnan, along with a dumpling bar, a street-food stand, a bread station and various styles of stir-fry. Upstairs, a noodle bar offered a variety of the stringed starch, served in a soup broth or cold and topped quickly with one of many sauce options. Canteen No. 7, while smaller, was known for preparing the best malatang as well as cold dishes such as sesame noodles or my favorite salad concoction, called liangcai. This canteen tended to attract throngs of diners jostling for a plastic seat along picnic-style benches.

Chinese campus food can be regional

Each university has a handful of cafeterias, some of which specialize in one regional cuisine or specialty. One of the better known in the university district is the Xinjiang canteen at the Beijing Language and Culture University. Other cafeterias offer high-end service, such as the Beijing-style restaurant at the China Agricultural University.

At Minzu University in Beijing, where students come from varying backgrounds and thus culinary habits, canteens serve some of the best Muslim, Xinjiang and Tibetan food in town. Because this university is often the site of demonstrations and tension, however, to get on campus you need to have a student ID. I was last able to visit by seeking out a card-carrying student who could bring me as her guest.

So it is easy to understand why Chinese campus food has developed a good reputation and substantial following, much in the same way that big-name chefs and famous restaurants attract hordes of devoted diners. Considering that these canteens feed students day in and day out, they, and their chefs, should be given greater credit.

Zester Daily contributor Manuela Zoninsein is a Brazilian-American reporting on sustainable food, travel and business from Shanghai. A former dining editor for Time Out Beijing, her work has appeared in Condé Nast Traveler, ClimateWire and Newsweek. She writes about her passion for healthy, interesting and sustainable food at manuelasweb.com.

2. What do you eat? (Lunch at a university cafeteria in China)

3. A Uygur and his campus chain restaurants 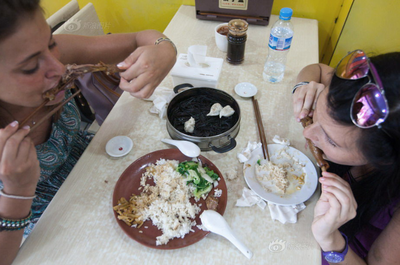 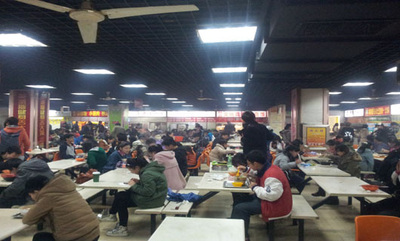 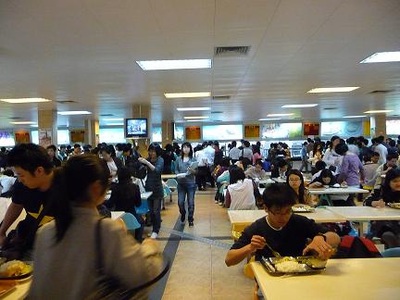 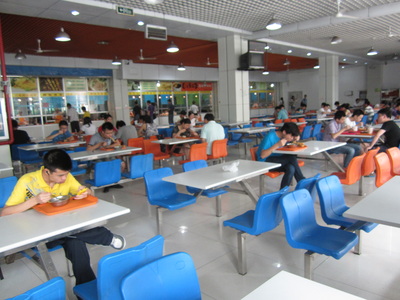 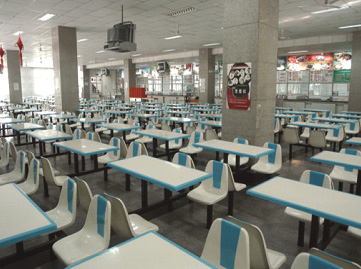 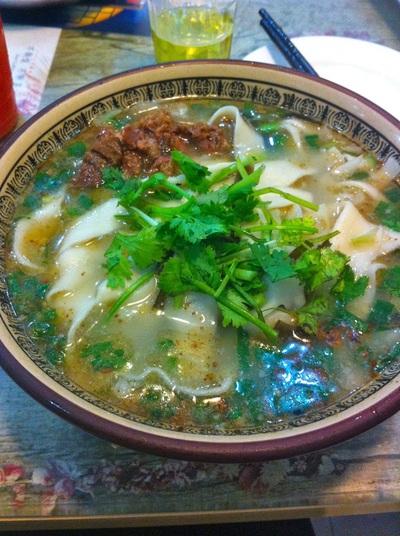 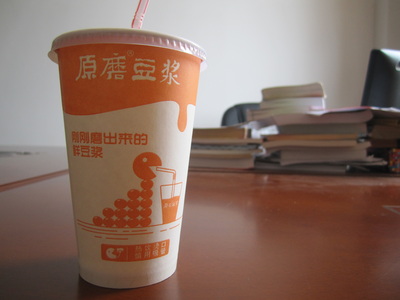 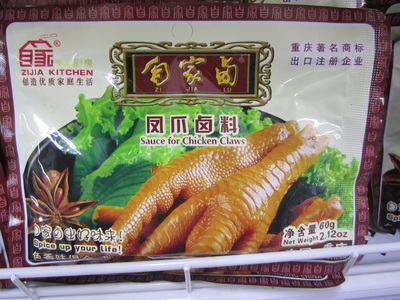 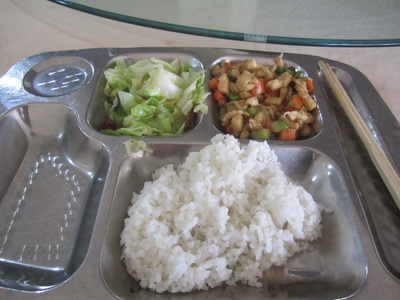 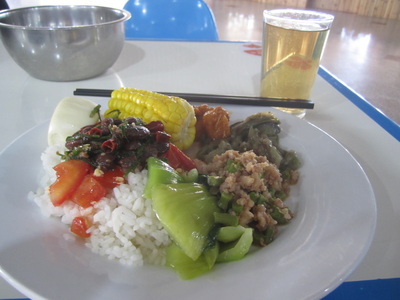 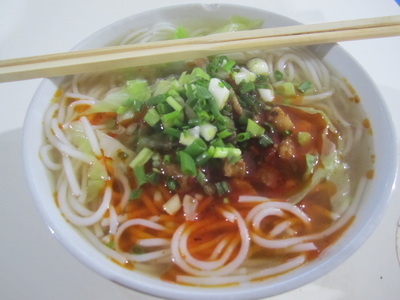 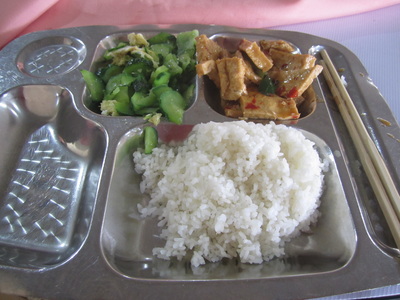 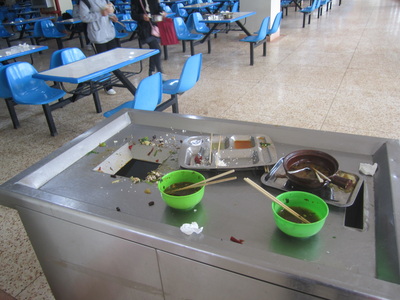 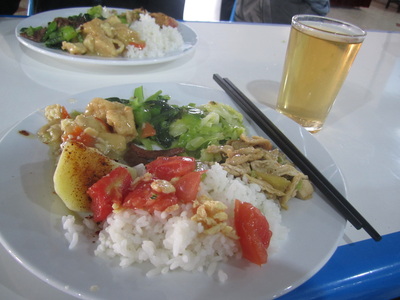 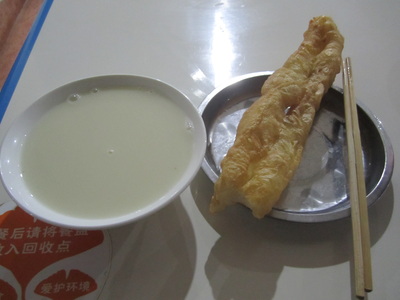 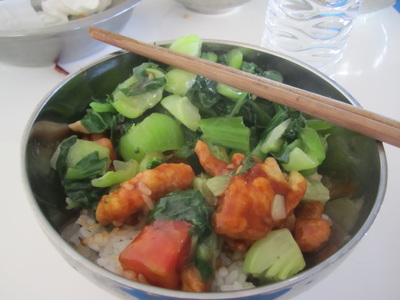 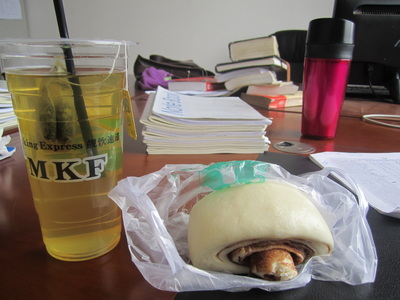 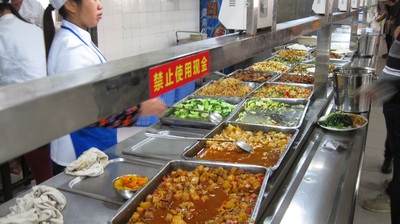 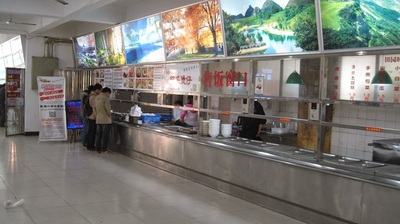 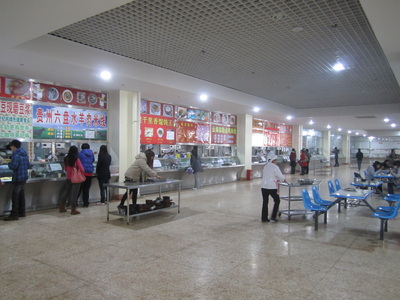 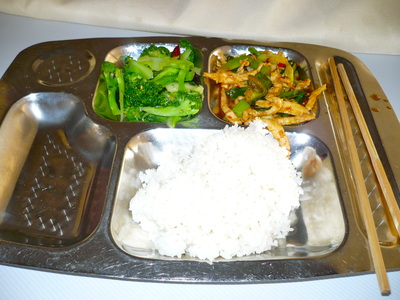 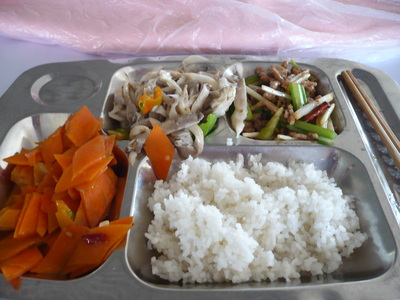 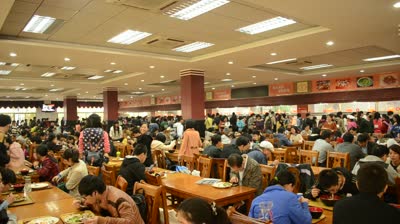